WG Realms 2:  Siege Breaker is a first person shooter made for EDuke32 (an enhanced 3D).  WGR2 is a total conversion of Duke 3D with 95% or more of the original game content replaced.  It is being released as a “standalone” game and does not require the original Duke 3D to run.  This document is to get you started playing the game. For more detailed information about the game, click on the links below. 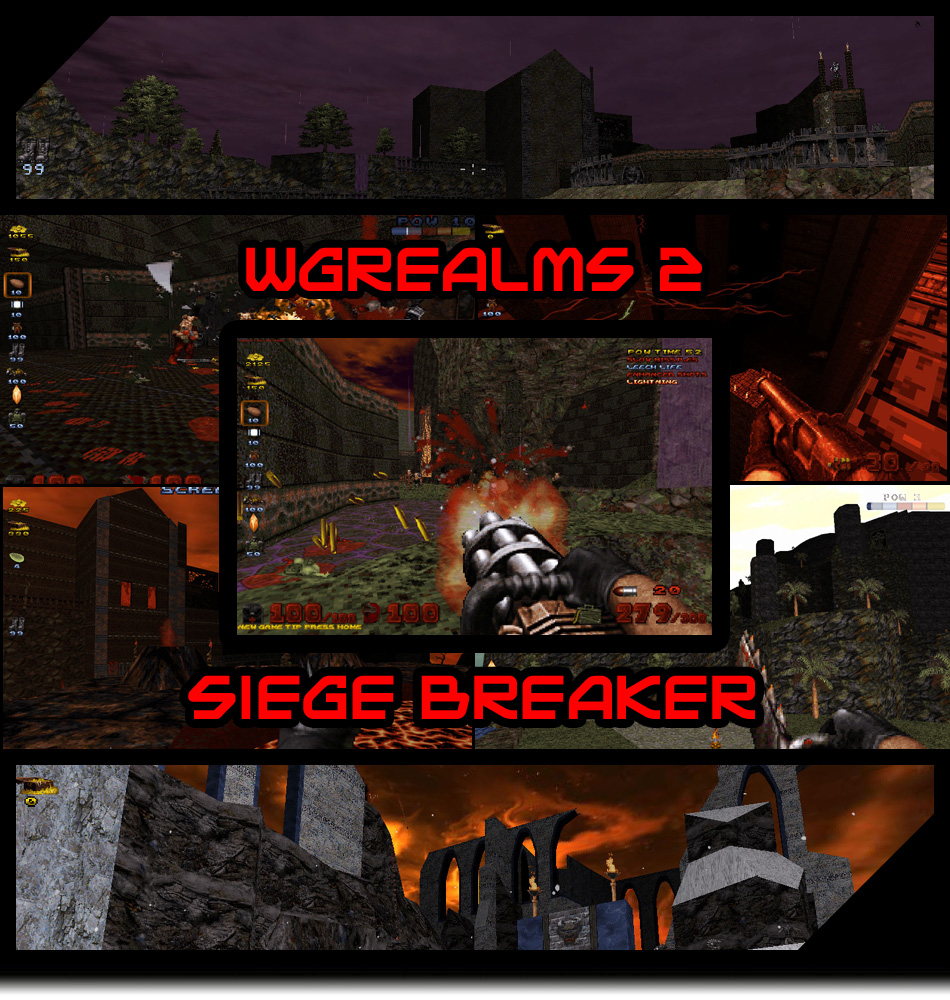 Unzip the contents of WGR2_SIEGEBREAKER.zip into an empty folder.

Method 1 -- Run the WGR2.bat file.  Press any key and EDuke32 will start.  Click the Start button in the window that pops up.

Configure the controls and other settings to your liking.  This game uses controls for –

Looking (use the mouse to look by default)

Note:  If you choose to bind keys to specific inventory items, realize that the names given to inventory items in the EDuke32 menu do not always correspond to the item name in the game.  For example, the “Jetpack” in the menu is actually the Jump Boots in the game.

Weapon selection (next weapon, previous weapon).  Weapons can also be selected by pressing the number key corresponding to it.

Shooting (fire, alt-fire).  All weapons except for the chainsaw (weapon 1) and the watcher sentries (weapon 8) have alt-fire modes.

IMPORTANT:  WGR2 works best using the default  32-bit OpenGL renderer.  Using the Polymer renderer (available with a checkbox in the EDuke32 start screen) is NOT recommended unless you have a very fast computer.  The Polymer renderer is still experimental and has not been optimized as of this writing.  If you do have a fast computer and Polymer works well for you, then you will be treated to some very nice dynamic lighting effects.  Another renderer option that is NOT recommended is the 8-bit software renderer.  If you use that, then the fonts and skyboxes will be very low resolution.  If the 8-bit software renderer is the only one available for you, then most likely that is because your video card driver does not support OpenGL.

Select “Start Game” from the main menu, then select one of the episodes and choose a difficulty setting.  The game will then begin.  It is assumed that you have some familiarity with first person shooters.  There are game tips that become available as you encounter new features that require explanation.  Some things, like how to defeat the monsters, you are left to figure out on your own.  Have fun!

WILLIAM GEE (All the levels in Siege Breaker and WGrealms)

WG and DG also did some art editing, though Cage did the most and the best.

COMING UP WITH IDEAS FOR EVERYTHING

Infernal Spider by Monolith with edits by "Icytux", "Tormentor667"

And special thanks to Richard “TerminX” Gobeille, Pierre-Loup “Plagman” Griffais, "Helixhorned", and the whole EDuke32 team for creating and maintaining the excellent platform that WGR2 runs on.

We also with to thank and acknowledge the talented artists who made the sprites and textures that we used (and often edited) from those old 8-bit games (Doom and Hexen in particular).

Using POW:  POW refers to magical energy stored by your character.  It is measured by the POW meter which appears in the upper right corner of the screen during gameplay.  When POW reaches 10 or more, pressing the POW key will activate one or more powers.  How many powers are activated depends on how full the meter is at activation time.  If POW is 50 or more, 5 powers are activated (the maximum),  if it is between 40 and 49, 4 powers are activated, and so on.  Once activated, powers will stay in effect until POW is completely depleted.

Accumulating POW:  When starting a game, you may choose between a Normal POW meter and a Revenge POW meter.  If you choose the normal meter, then POW will accumulate as you damage and kill enemies, and POW will decrease as you take damage.  If you choose the revenge meter, then POW will increase as you take damage, and it will also increase if you pick up health items while having full health.  POW does not decrease when taking damage if you use the revenge meter.  POW resets to 0 whenever you complete a level, regardless of your type of POW meter.

Slow Enemy Shots -- This causes all projectiles fired by enemies to move at 50% of normal speed.

Reflect Damage -- When an enemy damages the player it will receive 8 times the damage it inflicted reflected back at it.

Force Radius -- Enemies that get near the player are pushed back and take a small amount of damage.  When this is used in combination with Blade Vortex, the effect is reversed and it will pull enemies in.

Leech Life -- When the player inflicts damage on an enemy, a small percenage of the damage inflicted is added to the player's health.

Regeneration -- The player regenerates some life every second, up to his maximum health amount.

Convert Enemies -- Enemies become cursed and fight on your side when they take a fatal amount of damage.  The curse lasts for 30 seconds, after which the enemy dies.

Freezing shots --  The player's attacks cause enemies to freeze.  This even works with the flamethrower, which becomes a freezethrower.

Super Armor -- The player is given 100 armor and full environmental suit protection for the duraction of the POW.  He gets to keep these when it runs out.

Minotaur Swarm -- Minotaurs are summoned who fight on the player's side.  They cannot be killed.  In addition to their regular melee attacks they can fly at distant enemies and crash into them for big damage.  They gradually disappear when the POW is depleted.

Barbarian Horde -- Barbarians are summoned who fight on the player's side.  Unlike summoned minotaurs, they can be killed, but there are more of them.  In addition to the melee attacks, they can throw their hammers at enemies.

Blade Vortex -- Summons spinning swords that circle around the player.  They slice any enemies who get too close, killing most enemies in less than a second.

Lightning -- Lightning bolts periodically strike at monsters in a large radius around the player.

Meteor Storm -- Fiery meteors (or icy meteors, if used in combination with Freezing Shots) rain down from the sky in a large radius around the player.  They will target enemies or fall randomly if no enemies are around.

Summon Axon -- Summons a powerful wizard who fits on the player's side.

Appendix B:  Jedrik, the unlockable character

The first time you play WGR2, you will use Duke Nukem as your character.  In order to unlock Jedrik, you must complete the “Castle Demonhorn” mission.  With Jedrik unlocked, you can pick him as your characer when you start a new game.  As with Duke, using Jedrik will prompt various game tips to appear that instruct you on the use of the character.  His use is explained in more detail below:

Double tap forward to start sprint, then keep holding forward to keep sprinting. You can only sprint for about five seconds at a time, and recovery time is twice as long as the time you were sprinting. You cannot strafe or run backwards when sprinting.  Jumping  during a sprint will cover large distances.

Raise the shield by pressing Alt-Fire.  It blocks incoming attacks from the front when raised, but does not block splash damage. You cannot attack with weapons when the shield is up, but you can use a shield bash. To do a shield bash, sprint into an enemy. It knocks them back, stuns them and does some damage.  How much knockback and stun depends on how tough the enemy is and how long you were running. The shield bash takes a big chunk off of your sprint bar, so you can't do it constantly. But it's relatively safe, effective and uses no ammo. The shield is not available when the bow or the tripbombs are the selected weapon.

A dark blade with a big skull on it. When it has ammo (charges) hitting an enemy with it will curse them, causing them to fight on your side until the curse runs out. How long the curse lasts depends on how tough the enemy is (it doesn't work at all on end level bosses). When the curse wears off, the enemy takes a lot of damage, enough to kill most enemies. You can still use the sword when it has no charges, but it will act like a normal melee weapon, killing enemies with pretty good damage (it also does normal damage if hitting an enemy that is too strong to curse).

Shield power: Whilst holding the Corrupter, raise your shield and then tap backwards three times. If you have enough charges, this will cause 4 helper Rage Heads to spawn around you (their explosions will only hurt enemies, not you).

Does a lot of melee damage at close range. In addition, if the hammer strikes the ground (i.e. if you are standing on the ground at the end of the swing) it causes a shockwave that spreads outward in all directions, damaging and stunning enemies. The shockwave uses charges -- like the necrosword, the hammer becomes a normal melee weapon when used with no charges.

Shield power: Press alt-fire (the shield key) while attacking, and he will throw the hammer. If an enemy is targeted the hammer will go towards them, otherwise is flies straight. It can hit multiple times, and eventually it circles around and comes back to you. Until the hammer comes back, you can't use it again, but you can switch to other weapons (fist by default).

Freezes enemies in a radius around the player when you swing it, if it has charges (you do not need to actually hit an enemy to make it freeze them). Freezing works differently in WGR2 from in vanilla Duke. Enemies can be frozen while they still have their health. When you hit frozen enemies, they don't shatter until you have done enough damage to kill them normally. Another difference is the enemy will be frozen in whatever frame of animation it was in at the time of impact (fancy trick, that!) As with other effects, how long it lasts or whether it works at all depends on the toughness of the enemy. On a cyberdemon, for example, it has to be almost dead before you can freeze it for long. But the vast majority of enemies will be frozen by the axe for at least three seconds for every axe swing, which is more than enough. The axe also does a good amount of damage on direct hits.

Shield power: Raise the shield and tap backward three times. If you have enough charges, this will dump hail on some nearby enemies (if no enemies are around,

you can't use the power).

There are six different types of arrows:

regular (sticks in enemies and makes them bleed)

explosive (about as powerful as rpg)

burning (sticks in things and makes them burn)

freezing (freezes enemies in a large radius on impact)

spy (you see from the arrow's POV; the further it goes before hitting the more damage it

ARMAGEDDON SWORD -- Locks onto one enemy that is in view (usually the closest). If locked on, attacking will cause the player to quickly fly to the enemy, swing the sword for a lot of damage, then fly back to his original position. Jedrik is invulnerable during the attack, so this is safe to use on bosses or other enemies that normally harm the player on contact.

Shield power: Raise the shield and tap backward three times. If you have enough ammo and there are enemies around, it will cause spinning swords to appear over the heads of all nearby enemies. After a second, the swords will fall and cause damage. Enemies lose 50% of their strength, plus some straight damage. It is good against bosses and large groups of weak enemies.